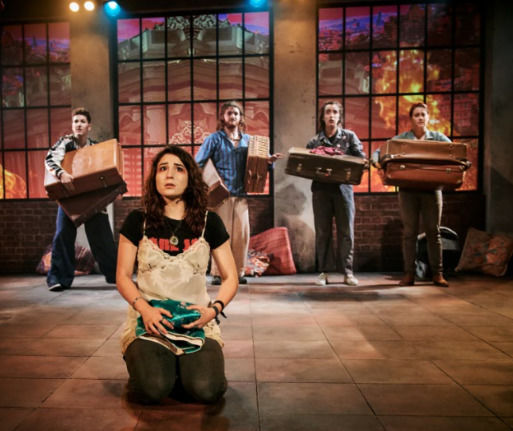 The joy of watching Bristol Old Vic Theatre School shows isn’t just in the opportunity to view industry players of the future, but also getting the opportunity to watch works that, for budgeting reasons alone, are unlikely to grace our regional playhouses but once in a blue moon. As a prescribed Brechtian, who believes him only below Shakespeare in the theatrical Mount Rushmore, it is always a treat to get to see his masterworks hit the stage. Unfortunately, in Jesse Jones’ production for the MFA International Students, the fallibility of directors’ theatre came to the core, its concept blocking any attempt at clean storytelling.

It starts strongly, as the audience enters the space to be met with a local community protesting the gentrification plans of a local property developer. With North Street just a few yards down the road from the Tobacco Factory space and ex-mayor George Ferguson occupying a floor just above the theatre, it’s not difficult the imagine these very protests could have happened in this very space. Yet, ultimately, it’s not grounded in any sense of time, place or location. The costumes suggest a mix of Seattle grunge and the 40’s, and the characters a mix of everything from Irish travellers to New Jersey made men to European gold-diggers.

This is the challenge Brecht set to his actors, his epic style stretching them to invest in vastly different characterisations across multiple theatrical forms. Many academics place Brecht and Stanislavski at opposite ends of the spectrum in terms of what they required from their actors, but I’d disagree. At the heart of both is specificity, and here the work is just not specific enough. The accents aren’t always immediately placeable and though the fourteen strong cast sketch outlines for their roles there is too little colouring in. The challenge is doubled by them having to constantly find moments in a stage that is a constant blur of motion, you just long for it to focus and let it breathe in close up for a second.

Jones has produced some wildly inventive work with The Wardrobe Ensemble but here there feels a lack of interrogation. Killing your babies is a useful maxim for all theatre-makers, and here there are too many instances where, although it is understandable where the idea comes from it ultimately gets in the way of a clean story. It’s lack of tightness in the thinking also bleeds into some of the action, across the evening there were multiple mishaps or dropping of lines that suggest it isn’t as yet fully drilled.

All of which isn’t to say there aren’t moments to latch onto. Marine Laurencelle heroine Gruca, grows from a young servant girl rescuing a babe on impulse to a self-sacrificing Mother who ultimately gets a happy ending in Frank McGuiness’ salty translation. Her climbing of mountains, by stepping up and down from a wooden box, demonstrates an audience’s enthrallment around actors physical endurance and her quieter tender moments with James Costello Ladanyi fiancée soldier are the most emotionally effective moments of the evening.

It’s the Act 2 emergence of Alice Birbara’s Dionysian, pan-sexual judge Azdak that the night really comes alive. Her Coke snorting, rock star inflected turn brings out the key Brechtian elements of showbiz razzmatazz and a cocked eyebrow to its audience as if to suggest complicity in its abundance. There is also a thrilling soundtrack, composed by musical director Jack Drewry and delivered by Jessie Fahay, Darby Hannon and Claire Shenstone-Harris that utilises the same punkish spirit

If Brecht picked the wrong side of history in plumping his sympathy down for Stalin and communism, he knew how to wrap up a fairy-tale, as good triumphs over evil and a mother gets both child and man.  Its second half leaves its audience with enough good will, but at three hours this messy, inventive, meandering, sexy and occasionally wrong-headed evening pulls and tugs all over the place.

The Caucasian Chalk Circle plays at Tobacco Factory Theatres until the 29 June.